We are all aware of current construction inflationary factors and the worry must be that existing sums insured will be “challenged” in the event of a loss or claim.

The issue will be compounded if the sum insured is inadequate which is quite likely in the context of “rolling renewals” where the original sum insured has become out of date and has failed to reflect year-on-year inflation.

In some cases, there is little or no explanation for the origin of the sum insured other than it may have been based on the market value or there may have been a change of management company etc.

We set out hereunder the factors driving current building inflation and how Insurers seek to address inflationary factors:

The recent Tender Indices as produced by the SCSI for the First Half of 2021 shows an increase of 7% as a national average for the past 6 months. This represents a full year increase of 8.3% (July 20 – June 21). This is the biggest yearly jump since 2000 at the height of the Celtic tiger. This follows one of the smallest yearly jumps (due to the pandemic). While this is a significant jump, the underlying market conditions are different to 2000. The industry has changed significantly since construction restarted post lockdown. Both material and labour prices have soared since the re-opening and there are supply issues with both. The real effects of Brexit are also being felt. There are many reasons for the rise in material costs, most notably:

Market research by a leading building contractor in Ireland indicated the following price movements in materials. 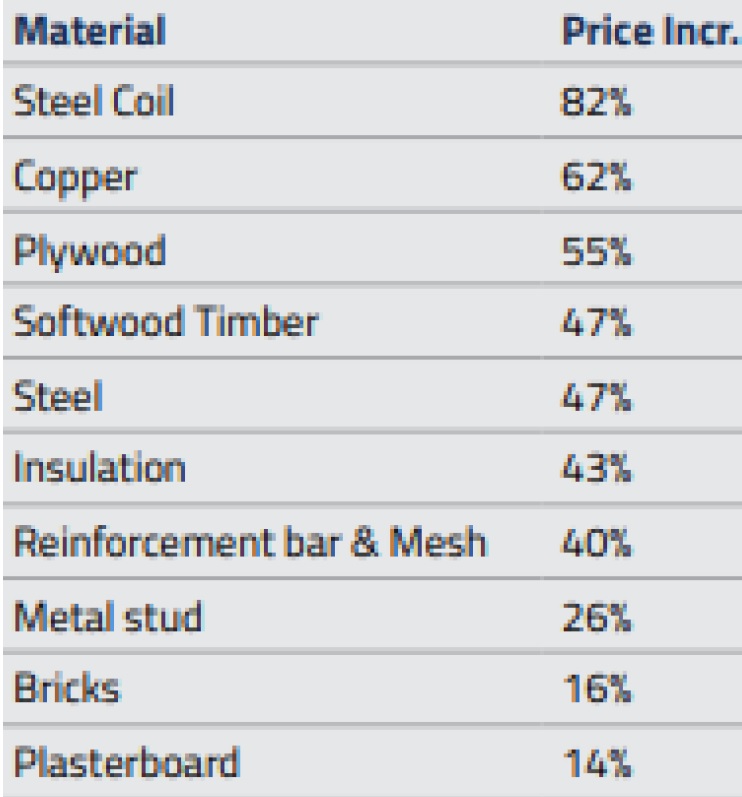 Price increases have become even more dramatic in recent weeks on the back of the conflict in Ukraine, with many construction outlets (suppliers / contractors) pointing to the inability of the industry to secure fixed prices for materials or fixed delivery programmes. Examples of the impact this is having on construction materials include:

This is further evidenced whereby:

The survey also found that 91% of construction companies believe the economic sanctions arising from the conflict in Ukraine will lead to a further rise in construction costs over the next 3 months, while 85% expect the price of construction projects to increase during that period. As a response to these issues nine out of ten (89%) construction companies want to see the Government introduce an effective and fair price variation clause into public sector contracts, which would apply retrospectively.

In reality the key challenges identified by the construction sector are:

The building sector is therefore currently experiencing significant inflationary factors particularly on materials which are averaging between plus 15% and plus 20% and there is a knock-on effect in terms of labour which is accentuated due to shortages of particular trades.

The Governments have recognised the significant construction inflation challenge facing contractors in that they have agreed to pay up to 70% of builders’ inflation related construction cost in an open-ended scheme which is set to cost millions of euros per month.

Minister for Public Expenditure, Michael McGrath stated on the 10th May 2022 that Public Work Schemes could flounder due to builders’ profit margins being eroded making them unsustainable.

The impetus for the scheme is due to cost pressures on the construction supply chain caused by the war in Ukraine which is creating particular difficulty for longer lead in time project which were tendered and prices agreed before the current pressures emerged.

The cost must be related to inflation and the impetus is to ensure that the State can deliver the National Development Program (NDP).

A recent report by the training agency, Solas suggests that more than 50,000 construction workers are needed if the Government is to meet the targets aimed at tackling the housing crisis. This underpins the overall shortage of labour in the construction sector which contributes to inflation and it is likely the position will not improve for the foreseeable future.

How Insurers have sought to address inflationary factors:

In the 1920’s in the UK, representatives from the textile and metal industries made representations to Insurers to the effect that normal claim settlement procedures which involved deductions for wear and tear dictated that these trading companies had not enough funds available to make up the difference between the traditional indemnity valuation and the cost of replacing machinery and buildings.

The insurance industry therefore devised a form of cover which became known as “Reinstatement cover”. The essence of this was that the indemnity calculation was to be based on the cost of replacing damaged machinery and/or buildings without deductions for wear and tear. In essence this was a deviation to some extent from the principle that an indemnity was intended to put the insured in the same position before the loss as after in that historically wear and tear deductions were applied to reflect the age and condition of the item, machinery or building.

The premise of this cover was that the sum insured was adequate and in terms of the Reinstatement Memorandum “Special Conditions” dictated that at the time of reinstatement that 85% of the Value at Risk (VAR) must not exceed the sum insured. In essence this provides a tolerance of 15% for under insurance for example:

This form of cover was introduced to mitigate the problem of under insurance arising from inflation as an alternative to the method applied under the Reinstatement Memorandum.

The essence of this is that the estimation or forecast of possible or probable levels of inflation is made at the inception or renewal of the Policy, hence the reference to “Day One”.

The “Special Condition” applicable to this form of cover dictates that the insured notifies the “Insurer of the Declared Value of the property insured” which applies on the day the Policy is incepted or is renewed. This is referred to as the Declared Value. The second aspect of this is the selection of a possible rate of inflation in the period after “Day One” to allow for the period of insurance and possible maximum period for reinstatement of the damaged building or plant or machinery. For example:

Which is preferable? Both methods are appropriate but the Reinstatement Memorandum is potentially capped in the context of the 15% level of tolerance. It is our view that in light of current inflationary factors that the 15% on a general basis is inadequate and that Day One cover would be more appropriate given that your estimate for inflationary factors can err on the safe side and in light of current inflation which could be running on average between 20% and 35%.

The Solution? – a Value at Risk Survey

We are seeing significant levels of under insurance and this is being compounded by rampant building inflation. A lot of the difficulty is how the original sum insured was established. These may have been based on the original construction cost and indeed some based-on market value which is completely irrelevant to the reinstatement Value at Risk calculation.

There are other situations where building extensions have been added or indeed “rolling renewals” where previous Policy information is out of date and is not reflected on a year-on-year basis.

The solution is a full review of current cover with a site survey to encompass all construction features to include significant additional features such as underground parking, tanking, high spec fit-out etc.

We provide this service and our report is prepared and signed off on a joint basis by a Chartered Loss Adjuster and Chartered Quantity Surveyor. The end product is a detailed report with a recommended sum insured figure with an appropriate allowance for inflationary factors. This can be subsequently reviewed on a desk top method on an annual or biannual basis as required.

We hope that you have found the foregoing of interest and informative and please contact the following if you have any queries.

Oops! We could not locate your form.

By continuing to use the site, you agree to the use of cookies. more information